Homer Denius and George Shaw founded Radiation Inc. in 1950. The engineers of the new company were pioneers of electronics for the space and defense industries. They specialized in advanced radio communications including PCM telemetry, satellite earth stations, spacecraft electronics, electronic surveillance and satellite reconnaissance applications critically important to the nation's security. In 1967, only seventeen years after Radiation, Inc. was founded, the company had grown to 5,000 employees and was acquired by Harris Corporation.

Some of the Radiation, Inc. employees saved memorabilia and documentation about their engineering accomplishments at the dawn of the Information Age.
Their heritage resides in manuals, photographs, correspondence, physical objects and more for researchers to study the history, technology and culture of Radiation, Inc. 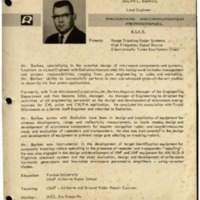 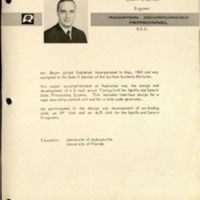 Mr. Beyer was assigned to the Data II Section of the Surface Systems Division and designed/developed components for the Apollo and Saturn Data Processing Systems, most notably a 3 rack group Timing Unit. 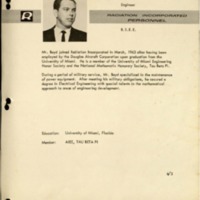 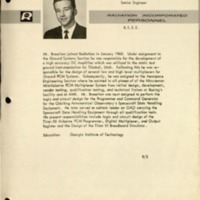 Mr. Braselton was first assigned to the Ground Systems Section and subsequently the Aerospace Engineering Section. He developed instrumentation for Thiokol, as well as PCM telemetry equipment for various programs including Minuteman, the Orbiting… 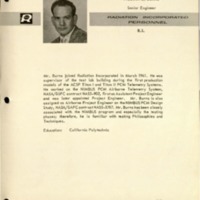 Mr. Burns was supervisor of the test lab building during Titan I & Titan II. He also served as project engineer on the NIMBUS program. 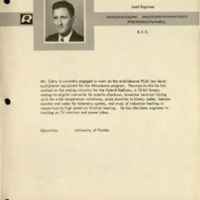 J.D. Corry worked on telemetry components for the Minuteman program, in addition to other work on various telemetry projects, tv monitors, and power tubes. 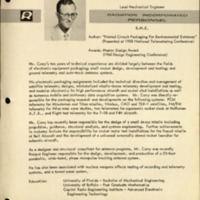 William Corry was responsible for the packaging research and development for: Minuteman and Titan missiles; the Nimbus, OAO, and TSX-1 satellites; telemetry for Atlas and the T-38 and F4H aircraft. 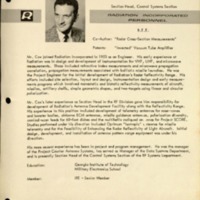 Mr. Cox was involved in the design/development of instrumentation for VHF, UHF, and microwave measurements. As Section Head of the RF Division, he developed Radiation's Antenna Development Facility and Reflectivity Range. He also managed the… 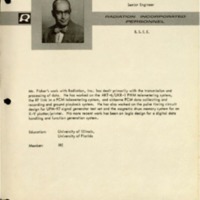 Mr. Fisher dealt primarily with the transmission and processing of data, as well as logic design. 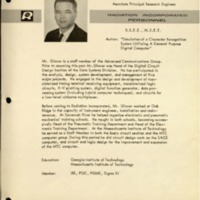 Mr. Glover was a staff member of the Advanced Communications Group and participated in the analysis, design, system development, and management of five major projects. 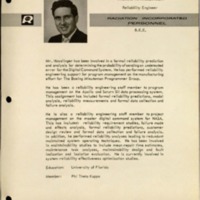 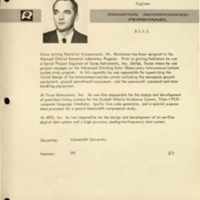 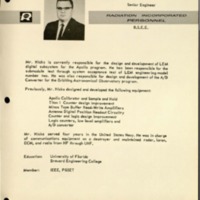 Mr. Hicks was responsible for the design/development of equipment for the Apollo program, Titan I, and the Orbiting Astronomical Observatory (OAO), among other projects. 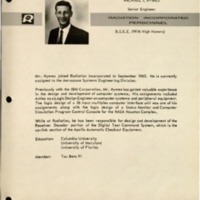 Mr. Hymes was a Logic Design Engineer who was responsible for the Computer Simulation Program Control Console for the NASA Houston Complex, as well as development of components on the Apollo project. 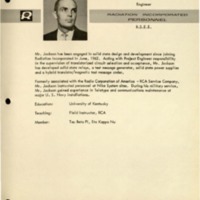 John Jackson was engaged in sold state design and development of various equipment. 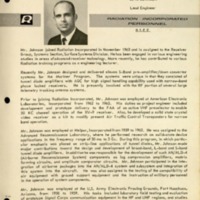 L.R. Johnson was an engineering lecturer for Radiation's training programs and designed 11 components for the Mariner Program, among many other accomplishments. 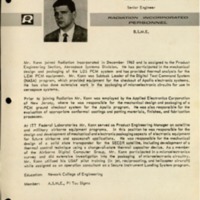 Mr. Kann worked for the Product Engineering Section, Aerospace Systems Division and was involved in the mechanical design and packaging of telemetry equipment for the Apollo program. 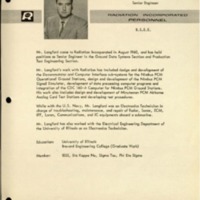 Mr. Langford as assigned to the Ground Data Systems Section and Production Test Engineering Section, where he designed/developed components for the Nimbus and Minuteman programs. 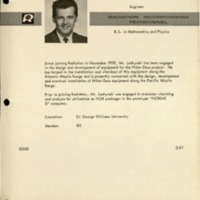 Mr. Leshynski was involved in the design, development, and installation of equipment for the Nike-Zeus project. 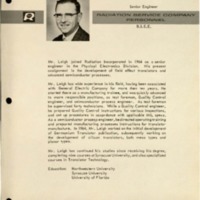 Mr. Leigh worked for the Physical Electronics Division and was tasked with developmnet of field effect transistors and advanced semiconductor processes.
View all 782 items