This collection holds the material collected and created during Dr. Dave Weldon’s tenure in the United States Congress. Dr. Weldon held his seat from 1995 until 2008. The collection contains information on the space program, AIDS, family planning, 9/11, the Columbia accident, and defense. The collection has Bills that were signed by Weldon as well as much of the research that went into developing these Bills. Within the collection are also many letters to and from Dr. Weldon from other law makers and government officials. Other items represented within this collection are a sampling of Representative Weldon's daily calendar and invitations. 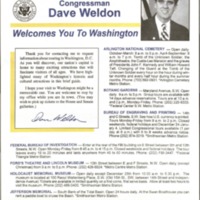 Newsletter thanking constituents for visiting the office as well as giving all the pertinent information on seeing the tourist sites in Washington D.C. 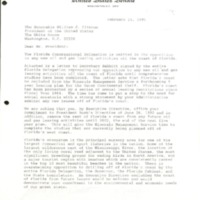 Opposing gas and oil leasing off of the Florida coast. 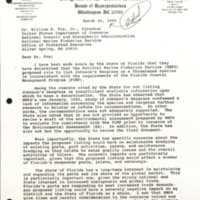 Letter to Dr. Fox discussing the addition of Johnson's Seagrass to the endangered species list

Letter to Newt Gingrich from Dave Weldon and others, November 29, 1995 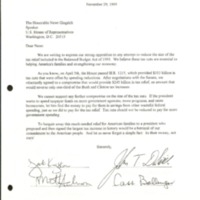 Expresses opposition to any attempt to reduce the size of tax relief.

Letter to President Clinton from David Weldon and others, November 20, 1995 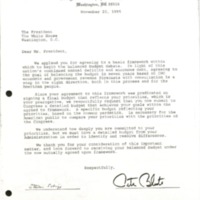 Applauding the agreement for a basic framework to begin the balanced budget debate.

Letter to Bob Livingston from Dave Weldon and others, September 22, 1995 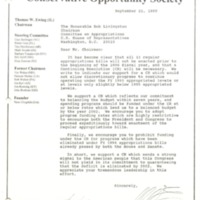 Stating that a Continuing Resolution (CR) has become necessary. 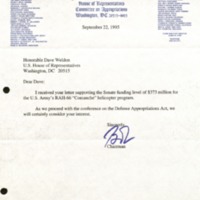 Thanking Dave Weldon for his support of funding for the Comanche helicopter. 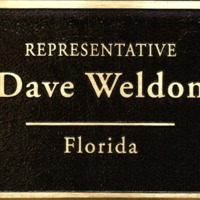 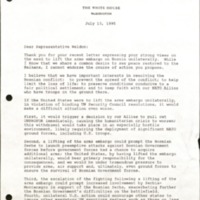 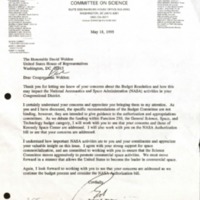 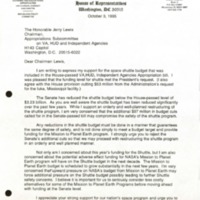 Letter to Ambassador Mickey Kantor from Congress of the United States -November 15, 1995 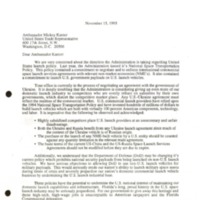 Concerns about the direction the Adminstration is undergoing due to United States launch policy, signature sheet 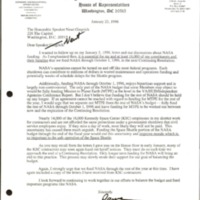 Discussions about NASA funding, bipartisan support, Improvement of morale for safe operation of the Space Shuttle

Letter to The Honorable Mickey Kantor from David Weldon- February 23, 1996 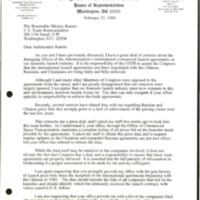 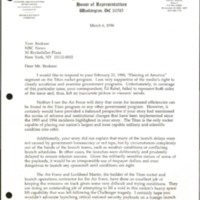 Fleecing of America segment on the Titan rocket program 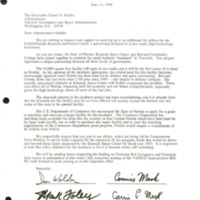 Thank you mural from the crew of the space shuttle Endeavor 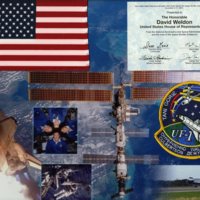 A photograph, patch and American flag that were flown in the space shuttle Endeavor from December 5-December 17, 2001 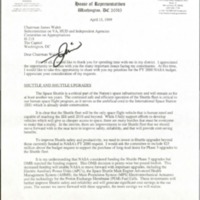 Representative Weldon is sharing his priorities for the year 2000 space program projects. 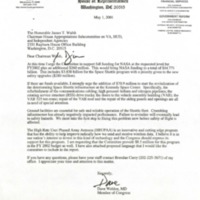 Urging the committee for full support of the space program for the year 2002. 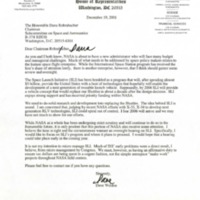